The Katorga-12 Security Group are an antagonistic faction in Singularity.

The Katorga-12 Security Group appears in a few parts of Singularity as a hostile faction, typically whenever Renko travels back to the 1950s, as well as in several Echo Events. They are the primary security force of Katorga-12, and are commanded by Nikolai Demichev.

Their final fate is unknown, but a number were trapped inside Null-Space inside the Singularity Labs, while an audio log early on in the Workers' District indicates that a some managed to escape via boat.

Their first encounter is made when Renko travels back to 1955 to save Dr. Barisov, who was killed during a takeover by Demichev when he refused to turn over the TMD. Three Soldiers can be found on the ground floor of the labs threatening three scientists, whom are executed as traitors after they refuse to side with Demichev. The player can interrupt, killing the Soldiers before they can kill the scientists. Afterwards the player will have to fight several more groups to rescue Dr. Barisov and to reach a Temporal Rift back to the present day.

Their next appearance is during the Central Docks, as the player travels to The Pearl in order to retrieve the E99 Bomb.

Their third appearance is in the E99 Processing Complex, appearing at various parts throughout the facility while attempting to stop Renko from charging the E-99 Bomb.

And finally at the end of the game they also appear in the Singularity Tower during the present day, trapped inside Null-Space during the First Event.

The Soldiers of the Katorga-12 Security Group are wearing the M43 uniform (summer and winter type), the Soviet army's uniform of WW2, along with either the Soviet garrison cap or an SSh-39 Helmet.

All of their weapons are non-usable by Renko, and when killed, will drop ammo for Renko's corresponding weapon. They are also capable of using Grenades. 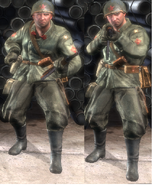 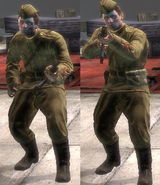