The Zek King is the first major boss the player faces in Singularity.

It first appears when you are riding an elevator.It tries to climb the elevator and reach Renko but is stopped when the elevator gets to the second floor of the building.It is seen again when it alerts Demichev s men to Renko by smashing a column.You see it for the third time when it crashes through a wall and attempts to kill Renko. It slashes at him until he shoots it in the weak spot enough times which causes it to flee. It finally fights Renko in its fourth appearance but is killed.

The Zek King has much in common with smaller Zeks. However, it is notably bigger and unlike smaller zeks which are clad in tattered jumpsuits, the Zek King has opted to wear a set of cobbled together makeshift armour which is eventually destroyed in his battle with Renko.

The Zek King makes a non-playable appearance in multiplayer as the leader of the creatures.It only gives orders.

It is shown to be sadistic and enjoys torturing its victims.It has a soldier stuck on a spike in its boss room.It taunts him by jumping around with a hammer until throws it at him killing him.﻿ 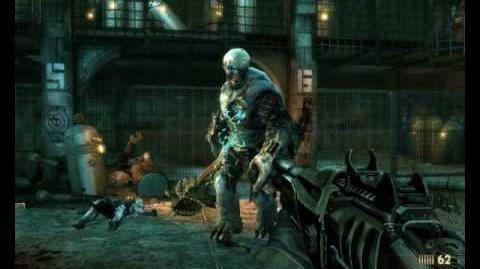